Home » Maimonides and the Merchants 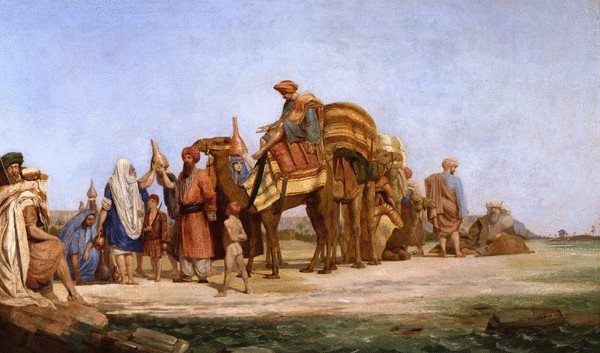 The advent of Islam in the seventh century brought profound changes to the Middle East and to the Jews living there. The unification through Islamic conquest of the formerly warring great empires of Christian Byzantium and Zoroastrian Persia opened up vast territories for long-distance exchange of goods within a single realm. For Jews, the predominantly agrarian economy of the Talmudic period was utterly transformed by these developments. Among other changes, for the first time Jewish merchants entered long-distance trade, from Persia in the East to Spain in the West and, in the late eleventh, twelfth, and early thirteenth centuries, as far as India.

The Talmud was out of date with respect to the new commercial reality for the simple reason that it was compiled in and for a predominantly agricultural Jewish society. Lacking a halakhic basis for many of the new marketplace practices they encountered, Jewish merchants followed “the custom of the merchants,” called ḥukm al-tujjār in Arabic by the Geʾonim, the rabbinical heads of the Babylonian yeshivot from the seventh to the eleventh centuries. Often, Jewish merchants even resorted to Islamic courts, where contracts followed Islamic law and where disputes between Jewish traders or between Jewish and Muslim traders could more easily be adjudicated. Under circumscribed circumstances, the Geʾonim sanctioned this practice.1

Maimonides, too, was faced with merchant practices that could not easily be reconciled with the Talmud. As I describe in my book, Maimonides and the Merchants: Jewish Law and Society in the Medieval Islamic World (University of Pennsylvania Press, 2017), in the Mishneh Torah (completed ca. 1178) he updated details of the halakha to conform with the new commercial reality. He even modified some halakhot so Jewish merchants would be able to employ Jewish law and go to Jewish courts, rather than resorting to Islamic law and tribunals.

Evidence of this is found in legal opinions written by Maimonides in response to problems encountered by Jewish merchants. More abundant evidence comes from the Cairo Geniza, the famous treasure-trove of hundreds of thousands of manuscript fragments dating from the tenth century onwards. These include texts in Judeo-Arabic that show the influence of Islamic law. The Geniza also preserves hundreds of letters of merchants and court records that reveal how they did business in the Islamic milieu. For instance, they employed Islamic commercial instruments like the Arabic suftaja, similar to a modern payment order, for transferring funds safely over long distances. Because of its ubiquitous use, the Geʾonim legalized the device, despite Talmudic prohibition of a similar mercantile tool. Maimonides, following the Geonim and R. Isaac Alfasi, head of the yeshiva of Lucena, Spain in the eleventh century, codified the suftaja in his Code.2

Because Talmudic halakha imposed other limitations on mercantile practices, Jewish traders often arranged business cooperation using a Muslim version of what the Talmud calls ‘isqa. The latter was a kind of “silent partnership,” in which one party advanced money or goods and another provided the work. But certain limitations were put into place in the Talmud to avoid the appearance of usury, which is forbidden between Jews.

The Muslim version of the ʿisqa, called qirāḍ in Arabic, was more attractive from a merchant’s standpoint. It operated as a kind of mutual loan. One partner “lent” money or goods to the other, who “lent” his work (though he might also invest some capital), returning to the investor an agreed-upon portion of the profit and keeping the rest for himself. Differing from the Talmudic ʿisqa, however, in the Islamic qirāḍ, the active merchant bore no responsibility whatsoever for financial losses to the stationary partner’s invested capital, whereas in the Jewish counterpart he did. For this reason among others, Jewish traders often arranged their business cooperation in line with the Muslim qirāḍ. Because of the similarity between ʿisqa and qirāḍ, Jewish merchants often used the Arabic term qirāḍ for both. To avoid confusion, they might call the Muslim version qirāḍ al-goyim, a distinction that occurs in some legal cases that came to the desk of Maimonides, soliciting his opinion.

Adhering to another custom of the merchants, Jewish merchants frequently acted as reciprocal agents, operating as “friends” rather than as partners or as associates in a ʿisqa/qirāḍ. A merchant traveler would accept money or goods from a business acquaintance for whom he would “do a favor,” trying to make profit with his “friend’s” property. He himself accrued none of the profit, nor was he responsible for unavoidable loss. His reward was that his “friend” would perform the same service for him at some future time. The convenience of this institution of reciprocity is attested by the fact that, statistically, it was by far the most popular form of profit-seeking among the Geniza merchants.

A fascinating pair of Maimonidean responsa tells the story of a legal dispute between two merchants that came before a Jewish court and was subsequently submitted to Maimonides for his opinion. One of the merchants had given the other one and one-third qinṭārs of Indian indigo (about 130 pounds), a commodity frequently dealt in by the Geniza merchants. He was to sell the indigo in Sicily, his destination. The owner of the indigo stated: “Take this with you.” But, the responsum continues, “at the time, they were not exact about the matter, nor did either impose any stipulations on the other.”  The merchant heading for Sicily testified that he “assumed that he was ‘fulfilling a request [Arabic: ḥāja]’ for the stationary merchant, without having a share in the profit, but he did not say this explicitly.”

The ship carrying the merchant to Sicily was captured by pirates, who seized the merchant and confiscated the wares he was transporting—goods that were his own and goods belonging to others. Some of the merchandise was held as qirāḍ. Owing to the ambiguity of that term, it could have been either a Talmudicʿisqa, in which the active merchant shared in both profit and loss, or an Islamic qirāḍ, in which the traveler bore no responsibility for loss. Sixteen years after returning home, the owner of the indigo brought him to court, insisting that their arrangement had been a sale and demanded payment from the Sicily-bound merchant. The latter testified: “I was not sure whether he intended it to be a qirāḍ or a ‘consignment’ (risāla)” (another name for transactions between “friends”) “and, if a qirāḍ, whether it was according to Islamic law [ḥukm al-goyim] or Jewish law [ḥukm al-yahūd]. But I am certain that I did not take it as a personal debt.” Maimonides ruled that, since it was based on circumstantial evidence, which could not be decided by the halakha, the case would have to be settled by solemn oaths to determine the basis on which the transaction had been initiated.

Unlike in Talmudic partnership andʿisqa, an agent could not be required to take an oath asserting his honest discharge of his agency assignment. This made it difficult for his agent-“friend” to enforce the implicit contract between the two. For that reason, mutual business agents often sought out of court settlements, or arbitration, or, even more challenging to Jewish legal authority, they resorted to Islamic courts.

Maimonides, who belonged to a merchant family (his brother David famously died in shipwreck on his way to or from India, carrying invested money from his brother as well as others) found a way to apply Jewish law to agency relations. The Talmud permitted business partners to be required to take an oath asserting their trustworthiness, even if there was only a doubt and not a specific claim concerning their honesty. Maimonides found a way to impose an oath on an agent, by cleverly drawing an analogy between a partner and an agent. Though some later commentators objected to this innovative halakha, it shows both how popular this type of commercial agency was among Jewish agents, and how, by making it part of Jewish commercial law, the great Maimonides sought to deter Jewish merchants from resorting to Islamic law and Islamic courts. 3

Facebook Comment
« From Heritage to the Construction of a Collective Memory of the Moroccan Jewish Diaspora
Under the Egyptian Sky: Jewish Poets in Interwar Cairo »