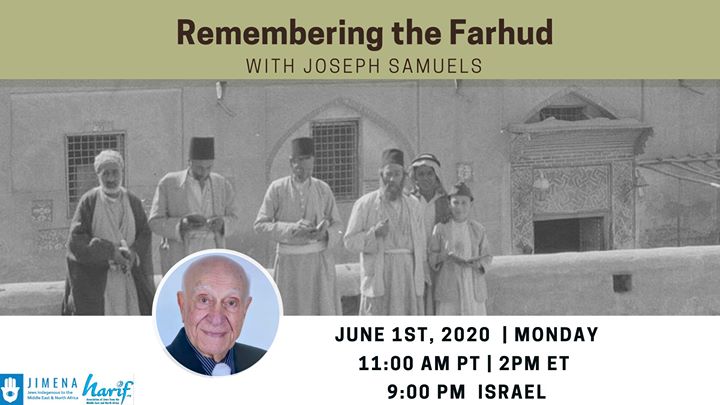 On June 1st, 79 years after one of the worst pogroms in Middle Eastern memory, we invite you to join together with Iraqi Jews around the world as we honor the victims of the Farhud and hear the personal story of a survivor. Jews had lived continuously in Iraq for over 2,000 years and just prior to the Farhud in 1941, the population of Baghdad, Iraq was 40% Jewish. However a pro-Nazi pogrom during the holiday of Shavuot left the community shattered. Today, The United States Holocaust Memorial Museum recalls that the Farhud was a turning point for Iraqi Jews and that, “members of the community remained in a state of profound shock that undermined their sense of security and stability, eventually prompting them to question their place within Baghdad’s society.”

Joining us is Farhud survivor, Joseph Samuels who was born in the Jewish quarter of the old city of Baghdad and was 10 years old when the Farhud took place. In 1949, Joseph fled from Baghdad to Basra by train and was smuggled to Iran and then to Israel. In 1956 he finished his service in the Israeli Navy and pursued his dream of higher education in Montreal, Canada. Joe will share with us his memories of Iraq, the story of the Farhud and insights from his new book “Beyond The Rivers of Babylon”.

Joining us from Israel is Lily Shor, Director of External Relations of the Babylonian Jewry Heritage Museum מוזאון מורשת יהדות בבל in Or Yehuda. The gathering will be moderated by Natalie Farahan, a Jewish communal professional of Iraqi Jewish-descent, and founding member of JIMENA’s Los Angeles Chapter.