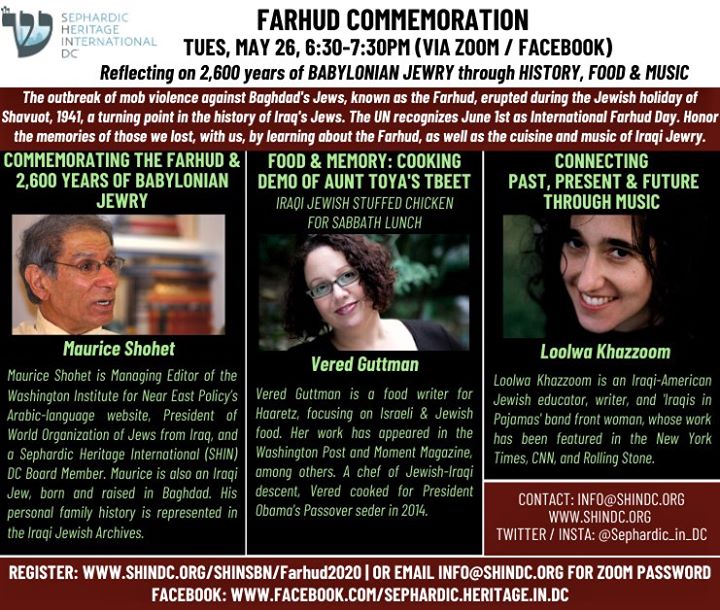 Reflecting on 2,600 years of BABYLONIAN JEWRY through HISTORY, FOOD & MUSIC – The outbreak of mob violence against Baghdadi Jewry, known as the Farhud, erupted on June 1, 1941, during the Jewish holiday of Shavuot. It was a turning point in the history of Iraqi Jews. The U.N. recognizes June 1st as International Farhud Day. Join us to honor the memories of those who were lost by learning about the Farhud, as well as the cuisine and musical tradition of Iraqi & Babylonian Jewry.

MAURICE SHOHET – COMMEMORATING THE FARHUD & 2,600 YEARS OF BABYLONIAN JEWRY – Maurice is the Managing Editor of the Washington Institute for Near East Policy’s Arabic-language website, President of World Organization of Jews from Iraq, and a SHIN DC: Sephardic Heritage INternational DC Board Member. Maurice is also an Iraqi Jew, born and raised in Baghdad. His personal family history is represented in the Iraqi Jewish Archives.

VERED GUTTMAN – FOOD & MEMORY: COOKING DEMO OF AUNT TOYA’S TBEET – IRAQI JEWISH STUFFED CHICKEN FOR SABBATH – Vered is a food writer for Haaretz, focusing on Israeli & Jewish food. Her work has appeared in the Washington Post and Moment Magazine, among others. A chef of Jewish-Iraqi descent, Vered cooked for President Obama’s Passover seder in 2014.

LOOLWA KHAZZOOM – CONNECTING PAST, PRESENT & FUTURE THROUGH MUSIC – Loolwa is an Iraqi-American Jewish educator, writer, and ‘Iraqis in Pajamas’ band front woman, whose work has been featured in the New York Times, CNN, and Rolling Stone.