Home » Luqmat: A Little Fritter with a Long History 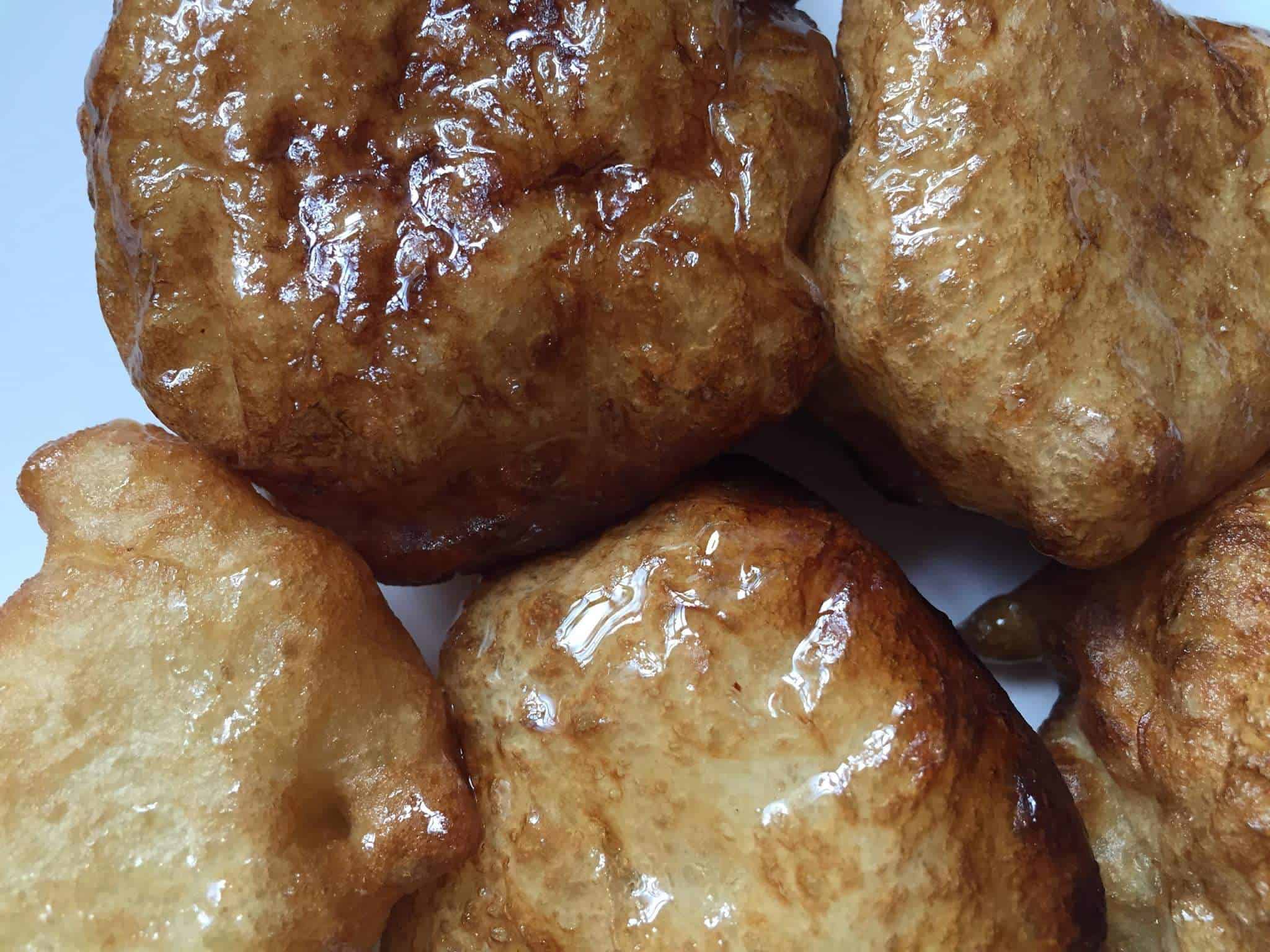 How did these little-yeasted fritters—whatever you want to call them—spread all across the Mediterranean? And how did they become the preeminent Ḥanukka treat of the Sephardi world, from Morocco to Turkey?

According to culinary historian Gil Marks in his Encyclopedia of Jewish Food,1 the practice of deep-frying dough dates back at least to the ancient Romans, though it was forgotten in Europe with the collapse of the Roman empire. The custom persisted in the eastern Mediterranean and the Middle East, however, where oil for deep-frying remained abundant and inexpensive. It likely appeared in the Middle East or Persia during the Middle Ages when some enterprising cook got the idea to drop blobs of yeasted dough into hot oil.

The earliest known recipe for a dish made of deep-fried yeast dough is for luqmat al-qaḍi (judge’s mouthful) and comes to us via Muhammad ibn al-Hasan Al-Baghdadi’s 1226 cookbook Kitab al Tabikh (Book of Dishes). The basic recipe for luqmat—a leavened wheat flour dough with a little sugar—hasn’t changed much since then. Since the batter on its own is quite plain, they are traditionally drizzled in a sugar syrup or, sometimes, topped with sugar.

Unlike European doughnuts, luqmat (and other, similar Middle Eastern fritters) traditionally do not contain dairy or egg, though some modern recipes add the latter for a firmer texture. The looser egg-free dough tends to puff up into unpredictable shapes when dropped into hot oil, unlike doughnuts’ thicker dough which holds its round shape.

In Spain, bumuelos—also fried in olive oil—were considered by Christians to be a sign of Jewish and Moorish cooking

Luqmat quickly caught on throughout the Mediterranean world—including Spain, where, once introduced by the Moors, they quickly caught on with Sepharadim. Everywhere the dish traveled it acquired a new name. Lokma to the Turks; loukoumades to the Greek; zvingous to the Romaniote Jews (whose ancestors arrived in Greece before the arrival of the Sepharadim there post 1492); sfenj (from the Arabic isfenj, sponge) to Algerians, ʿAwwamé to the Syrians and Lebanese roughly translating to (one that) floats, Libyans, Moroccans, and Tunisians; and, perhaps most famously, bumuelo (also known as bunuelo, bonuelo, binuelo, bimuelo, bumuelo, binmuelo, birmuelo, burmuelo, or bilmuelo—roughly translating, regardless of the spelling, as “lumps”) by the Jews of medieval Spain.2

In the Ottoman world, professional fritter makers sold them from small stores, and sultans employed fritter chefs in their kitchens—luqmat and its cousins have long had a special association with Jews. According to Gil Marks, the seventeenth-century Ottoman traveler Evliya Celebi remarked; “In the shops of the lokmatzi (fritter makers) and gozlemehci (sweet cake makers), a Jew is appointed as inspector, because Jews only eat cakes and fritters cooked in oil, while Muslims eat those cooked in butter”. In Spain, bumuelos—also fried in olive oil—were considered by Christians to be a sign of Jewish and Moorish cooking; even generations after the Inquisition, many Converso families continued to pass down the tradition of preparing the fritters each December, often without even being aware of their Jewish roots.

As with all things deep-fried, they are somewhat of an undertaking to prepare, and so homemade fritters were generally saved for special occasions—namely Ḥanukka, though luqmat were also known to make an appearance at Purim (and, with an unleavened dough made of matzah meal, at Passover). In the Muslim world, they are served as a special treat during Ramadan.

Fried in olive oil, luqmat were a natural for Ḥanukka, when Jews commemorate the small jar of olive oil that miraculously kept the Temple’s menorah burning for 8 days, and they are in fact the predecessor to well-known fried Ḥanukka fare such as latkes (Ashkenazi potato pancakes) and sufganiyot (modern Israeli doughnuts). Throughout the Sephardic world, they reigned supreme as the preeminent Ḥanukkan treat, and it was not uncommon for households to enjoy homemade fritters daily(!) during the holiday.

We know the association goes at least as far back as the twelfth century, when R. Maimon ben Yoseph (father of Maimonides), who lived in Spain and Egypt, wrote about this practice:

“One should not make light of any custom, even a simple one. Anyone for whom it is appropriate (with the financial means) is required to make a feast with merriment and food, to publicize the miracle that God did for us in those days. It is a popular custom to make “suphḡanin”, in Arabic “assfinj”, covered in honey, and in Aramaic, “isqeriṭaṿan“. This is an ancient custom, since they are fried in oil, in remembrance of [God’s] blessing.”3.

There is a curious Ladino tradition of translating “manna” as “bumuelos”4:

Manna, the miraculous food that sustained the Israelites in the desert, is compared in Numbers (11:8) to “cake in oil” (leShaḏ haShamen), and in Exodus (16:31) described as being “like ṣapiḥith in honey” (keṢapiḥith). Ṣapiḥith—which, frustratingly, appears only the one time in the Bible, leaving its precise meaning somewhat of a mystery—is most commonly translated into English as “wafer.” But in early Aramaic translations, ṣapiḥith was translated as “isqeriṭaṿan.” In the Mishna (Ḥalla 1:4) and the Talmud (Pesaḥim 37a) this word is modified to asqariṭin— and there it is listed alongside suphḡanin as one of the exempt doughs. So when we look at this chain of associations — ṣapiḥith with asqariṭin, asqariṭin with suphḡanin, and suphḡanin with assfinj/isfenj, which is, essentially, the same thing as a bumuelo, we can see how Judeo-Spanish translators came to translate ṣapiḥith as bumuelo. Which is exactly what they were doing: the first Judeo-Spanish translation of the Bible to be printed, in Istanbul in 1547, has the Israelites feasting on luscious bumuelos every day of the forty years they spend wandering in the desert.

Doesn’t sound so bad when you put it that way, does it? 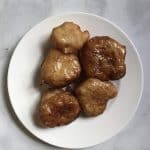 based on a recipe from Simply Laila

Facebook Comment
« Two Shamoshim: The Spanish Personalization of Ḥanukka in Post-Expulsion Aleppo
From Heritage to the Construction of a Collective Memory of the Moroccan Jewish Diaspora »